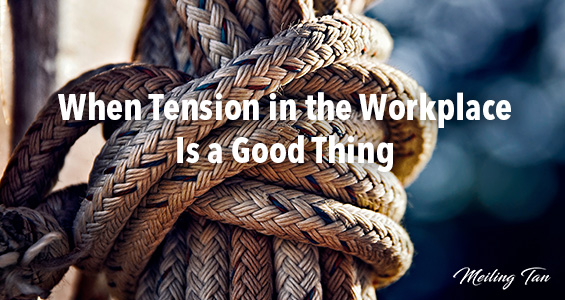 I manage quite a few writers in my line of work. My industry requires a lot of fact-checking, so generally there’s a sort of “truth” that we all adhere to. Either you’re right or you’re not. In a way, this is nice in that there aren’t any office politics to maneuver around.

Yet sometimes when I communicate to my writers that some of the things they’ve written are inaccurate, I get a bit of pushback. This is easily sorted out once we’ve investigated the matter more closely, but the fact that there was tension in the first place always intrigues me.

When this happens, I stop and take stock. I do this because I know that a tense working relationship isn’t a productive one.

Nobody likes being told that they were wrong. Contrary to popular belief, I don’t think this is a matter of ego. Plus, attributing it to arrogance doesn’t really give you a productive way to move forward: it merely puts up a wall between you and the other person and quickly turns the relationship sour.

Rather, I strongly believe this is because all of us — whether we’re kids in school or working adults — have an innate desire to do good work.

This is true even if we’ve become so disillusioned about our work that we’ve lost hope of ever living up to a certain set of standards (externally-driven or self-imposed). That desire is hardwired into us, though sometimes it may take a while to remove the mud of judgment and discouragement for the treasure beneath to shine through.

The Whole Truth, and Nothing but the Truth

Case in point. A while back, I had a run-in with one of my freelance writers. He’s based in the United States while I’m based in Singapore, so generally we only communicate via e-mail and Asana. (That means it’s easy to misread tone of voice and there’s lots more room for miscommunication.)

I’d given him some feedback on a few pieces of work he’d submitted, highlighting a few inaccuracies and asking him to rewrite certain portions to include a couple bits of information that’d be particularly helpful for our readers.

With one section, I pointed out a common industry-related practice that he’d missed out on, asking him to “look more closely at the details in future” rather than “just assuming.”

He became defensive. I woke up the next day to a long and mildly annoyed text message about how the requested revisions were asking too much of him based on the narrow scope of the articles, how he always made it a point to check for accuracy, and that there was nothing factually inaccurate about what he’d written.

After double-checking that the information he’d written was, in fact, inaccurate, I paused for a moment to put myself in his shoes.

I realized that as a freelance writer myself, I tend to be protective of my time. I want my clients to get amazing value for what they’re paying, but I also can’t be spending undue amounts of time on a single article at the expense of all the other projects on my plate. This has made it necessary for me to be very clear on the scope of any project I take on. In that sense, I could empathize with my writer, and wanted him to know that I valued his time.

I drafted him a message in response, screenshotting the specific bits of information that were inaccurate and letting him know that I understood his concerns. I told him how much I valued his contributions to the team (I really do) and that my comment about his “just assuming” was uncalled for, because I knew how much care he put into each of his articles. I also clarified my expectations of him, stating that the revisions that I wanted were one or two-liners, not major overhauls that would exceed the scope of the project and become a drain on his time.

After a few more back-and-forth exchanges along this line, things got a lot smoother. He realized that he had overlooked the bits of information I’d pointed out and accepted responsibility for the error. But more importantly, he realized I respected him as a writer, and that I wasn’t trying to make things difficult for him by heaping heavy expectations on top of his already large workload. In turn, he was more receptive to the feedback I gave him and could see that our styles complemented each other’s well.

Statistics tell us that fully remote workers are less likely to be engaged than their non-remote counterparts. (This doesn’t apply if you’re not working remotely 100% of the time — the stats for partially-remote workers show the opposite trend.)

A huge part of employee engagement is tied to your relationship with your direct supervisor, but it’s harder for a manager to get to know you on a personal level when you’ve never seen each other face-to-face.

That said, it’s not impossible – and I know part of my job as an editor is to build working relationships based on mutual respect with each of my writers. And since that time, I’ve made it a point to do so. My working relationship with this particular writer has also gradually transformed from one that was purely task-related to one that includes banter and lightheartedness, which I appreciate.

As Brené Brown puts it, “lean into the discomfort.” Tension in the workplace need not be a bad thing. In my opinion, these tensions reveal a great deal – whether about our own perceptions, or perhaps about a relational dynamic that needs to be shifted. The key is what we do with that feeling afterwards.