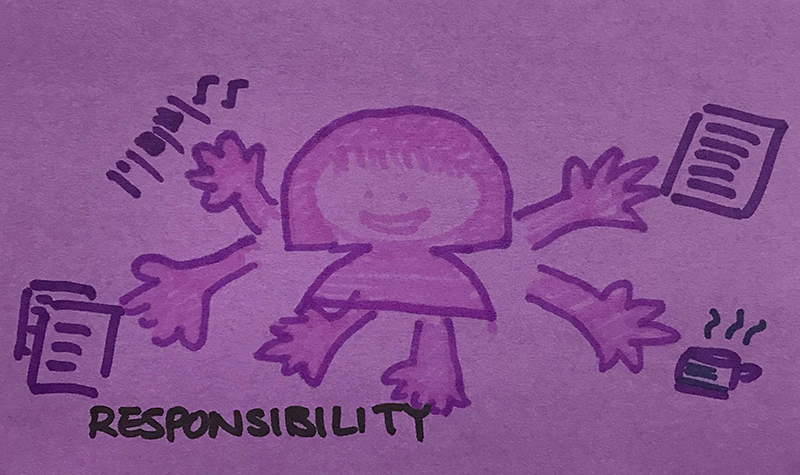 What’s the Responsibility Theme About?

The Responsibility StrengthsFinder theme is marked by high psychological ownership. This may be in the words they speak, the promises they make, the tasks they take on, or the people they’re committed to. Whatever they take onto their plate, they are compelled to see it through to completion. And because of their commitment to others, they strive to deliver work of the highest quality.

When those with the Responsibility talent theme commit to a task, it is almost as if they have a thought nagging at the back of their heads until they follow through with it. If for some reason they cannot deliver, they are morally obligated to do everything they can to make it up to the other party. Apologies are not enough; their Responsibility theme compels them to make restitution. It is important to note here that this does not mean that those with Responsibility will never make a mistake or accidentally forget tasks — after all, we’re all human and we all make mistakes at times! However, it does mean that being seen as dependable is important for someone with the Responsibility StrengthsFinder theme, and they will work hard to maintain that reputation.

Both the Responsibility and Maximizer StrengthsFinder themes are similar in that both are driven to produce quality work, and both can be somewhat perfectionistic at times. However, the difference is that the Responsibility talent theme is motivated by their commitment to others; they want to be known as trustworthy, dependable, and people who do what they say they will do. In contrast, Maximizer is motivated by their commitment to excellence. In work settings, the genius of the Responsibility theme shines through in the way they take great psychological ownership of their tasks and make sure everything that they take on gets done. The genius of the Maximizer theme, on the other hand, shines through when they’re given something that’s average or above average and they bring it to excellence.

The Responsibility and Relator StrengthsFinder themes are similar in that for both groups, having the trust of others is extremely important. However, Responsibility builds that trust by doing what they say they will do, as well as by being people of honesty, loyalty, and integrity. They form solid relationships by their dedication to serve and support those around them, including those who follow them. The Relator talent theme, on the other hand, builds trust through vulnerability and keeping the confidences with which they are entrusted. They desire deep, sincere friendships in and outside of their workplace, and they express this desire through their own genuineness as they share and relate with those around them.

Both the Responsibility and Analytical StrengthsFinder themes have a certain orientation toward the truth. Faced with any discrepancies, both themes would work to uncover the hard facts. The difference lies in their motivations: the Responsibility talent theme works to uncover the truth because of their commitment to protecting the trust of others and being known as people of their word. Values such as honesty, loyalty, and integrity are important to them. For the Analytical StrengthsFinder theme, on the other hand, truth must be found for truth’s sake. Without an accurate understanding of the situation, the root causes leading up to it, and the possible consequences, those with the Analytical StrengthsFinder theme feel unsettled. Their commitment is to making sure theories are sound, inaccuracies are done away with, and that the patterns in the data are made salient before the team moves forward. Responsibility is driven to live out the truth; Analytical is driven to uncover the truth.

Do you (or someone you know) have the Responsibility theme in your Top 5?

What are your thoughts on the talent theme? I’d love to hear from you in the Comments section below!

People exceptionally talented in the Responsibility StrengthsFinder theme take psychological ownership of what they say they will do. They are committed to stable values such as honesty and loyalty.

5 Themes Most Likely to Have An Issue with StrengthsFinder